Fed signals no rush to raise rates as pace of U.S. recovery moderates

Stocks opened lower but closed mixed on Wednesday after the Fed reiterated its easy money stance and investors digested a slew of earnings data. Separately, Crude oil hit a fresh high for 2016 which helped a slew of energy stocks continue to rally. On the economic front, pending home sales came in at 1.4%, beating estimates for 0.5%. At 2pm EST, the Fed concluded their latest meeting and reiterated their market-dependent and cautious stance.

Gary’s Thoughts: Do we have to say again…commodities still. Facebook nice gapper for the morning coming. 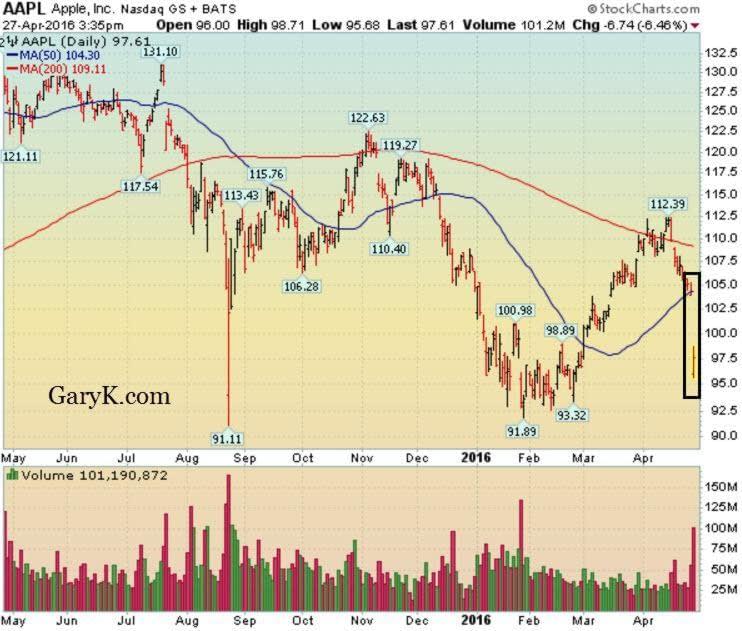 The stock remains one of the most over-owned and over-loved stock in history. This is the culmination of years of great performance and is quite normal. As the stock goes higher, more and more jump on board. Investors are used to making money. Nothing could go wrong. The problem is when a great stock finally tops out because that great company finally tops out, there is a lot of selling left to be done as owners become more disappointed with the performance.

Victim of its own greatness!

Apple is a victim of its own greatness. All great companies hit a wall. It is a wall of getting too big. Once a company gets too big, it is tougher to grow that business in ways and in numbers it used to grow. The fact is the main reason a stock price goes up is growing earnings and growing sales…the stronger the better, the longer the better. Once you are everywhere, once you are gargantuan, growth eventually stalls out which typically means the stock stalls out. This has happened to every great company throughout the years. Coke is trading now where it traded in 1997. Walmart is trading where it traded in 1999. Both businesses got to the size where they are not growing their business any more. Their businesses are not bad. Their businesses just cannot grow because of their size.

Apple used to be very good at guiding Wall Street with their numbers. It is well known on Wall Street how well Apple sandbagged earnings every quarter. They would always lower guidance and then beat guidance handily. Not any more! Apple cannot even beat their own lowered guidance. Trust by Wall Street is quite a fine line. Apple is now losing the trust of Wall Street.

We were just in China for 16 days. We visited several HUGE Apple stores. Business was not brisk! Stores that we have visited in the U.S. show a marked decrease in traffic…at least to our eyes.

Did Tim Cook really say that?

At what point does it become not cool to get the next phone? We have been asking that question for quite a while. We are not sure we are there yet as Apple can come out with a phone that people go nuts for. But Apple is a much larger company and the next great phone will not have the influence the last great phone had on their numbers and stock price.

Apple stock remains in its own private bear market which only worsened! We suspect long-term holders will continue to hold on but every day that Apple stock goes down is a bad day because it gets others to make the decision to sell. We can also safely tell you that growth stock managers will continue to sell as Apple no longer fits the moniker of growth stock. At this juncture, it is a value stock with many considering it cheap. But cheap is in the eye of the beholder and with decelerating earnings and sales, cheap can get cheaper. Apple’s next important line of support is the yearly lows at about $92.50. A break below would be even more negative than things already are.

2. Gary guides you through the latest round of earnings data and what it means for your bottom line

3. Gary talks Apple and dissects the numbers for you

4. Fed preview and what easy money is doing to markets