Reuters TV: Cruz pins it all on Indiana

Stocks fell hard on Thursday as investors digested the latest round of economic and earnings data. Before the open, stock futures were lower after the Bank of Japan (BOJ) decided to do nothing at their latest meeting. Some investors wanted to see them do more, hence the initial sell-off. At 8:30am EST, the government said U.S. GDP grew by only +0.5%, missing already reduced estimates for +0.7%. The weaker than expected GDP report clearly means more easy money from the Fed- and for now markets like easy money. Stocks briefly rallied in the morning but sellers showed up in the afternoon and sent stocks lower into the close. Earnings remain less than stellar. Facebook (FB) gapped up after smashing estimates but sold off and closed near its lows. Elsewhere, a slew of stocks gapped down after reporting numbers (DPZ, PRLB, HAR, GNC, just to name a few). This is the first big day of selling we have seen in months.

Gary’s Thoughts: UH OH! Lots of blow-ups. Let’s watch to see if the market sells off in spite of the AMZN gap tomorrow. 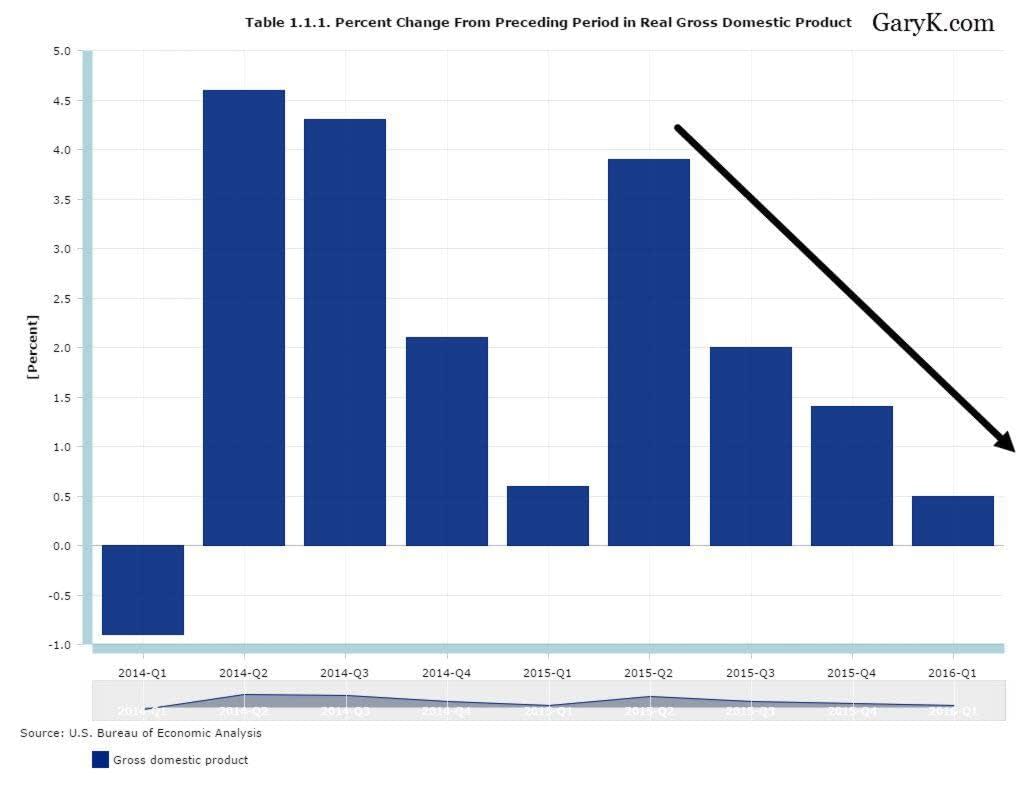 The U.S. economy expanded in the first quarter at the slowest pace in two years as American consumers reined in spending and companies tightened their belts in response to weak global financial conditions and a plunge in oil prices. Gross domestic product rose at a 0.5 percent annualized rate after a 1.4 percent fourth-quarter advance, Commerce Department data showed Thursday. The increase was less than the 0.7 percent median projection in a Bloomberg survey and marked the third straight disappointing start to a year.

2. Gary takes a closer look at earnings for you

3. Find out what areas are front and center on Gary’s radar