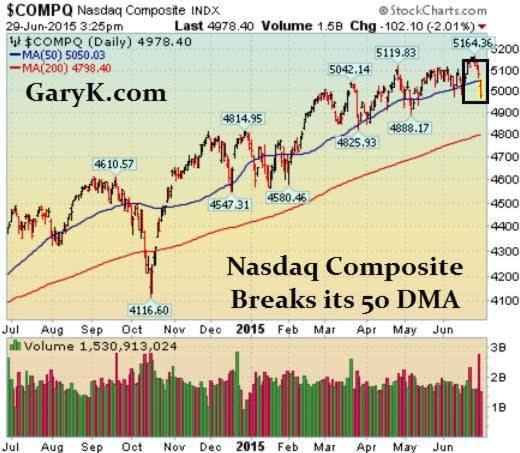 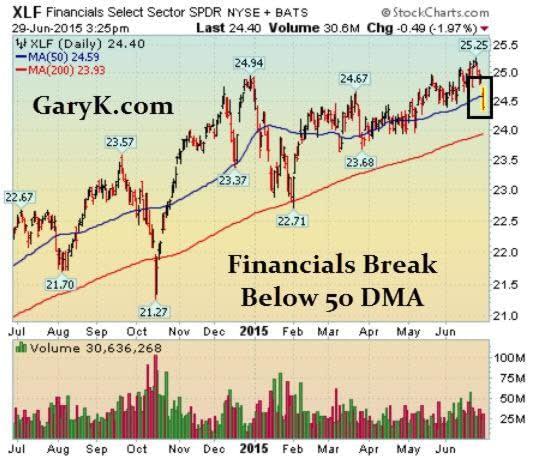 A little comedy. It just may be needed!

RIP Chris Squire! The bass guitarist and co-founder of my favorite rock band, Yes, passed away at the age of 67. Those who read this column and listen to my radio show know how often I have written and talked about Yes.

We would love nothing more than to delve right into the markets but something came up…namely Greece. The fun part is to watch the geniuses in the U.S. tell Greece what to do. Yup…the same people that have brought you $18 trillion of debt, trillions in printed money, a social security trust fund that was stolen from and just all-in-all incompetence, preaches to Greece. Again, here is the simple issue. Greece has been living on borrowed time. Keep in mind, this is going on while interest rates have been rigged down to zero. The problem is Greece continues to spend a good portion of government funds on early-retired government workers. They refuse to make important changes because when the receivers of socialism get used to the socialism, they refuse to accept anything less.  Alexis Tsipras, Prime Minister of Greece  said “In the coming days, what’s needed is patience and composure. The bank deposits of the Greek people are fully secure.” Our simple question is “secured by what?” Greece is keeping banks closed until the 6th of July. Who made that decision? It’s medication time Mr. McMurphy.

So as we write this, Dow futures are down 220 (they were down 350)and our email box is full of questions of what do we think? Our only thought is EASY MONEY. All answers by the simpletons running the shows around the globe has been EASY MONEY to fix all the ills. But the problem with easy money is that you have to get easier and easier to keep the ponzi scheme going until there is nothing left or until markets react negatively…which would stop them dead in their tracks.  All easy money does is put off the inevitable. Does anyone even realize that the reason they have printed anywhere between $15-20 trillion(depending on whose counting) is because 5,6,7,8,9,10 trillion didn’t work? Do we hear $30 trillion?

We would like to have next week’s newspaper today but since we do not, we will just tell you that going into tomorrow:

The tape continues to be split down the middle even with the major indices just coming down off recent highs. This is a big issue and if nothing changes, will come back to haunt markets as these divergences always have. As we have reported to you for months, we remain negative on a slew of areas in the market. Included are:

Energy, Oil & Gas, Bonds, Junk bonds, Reits, Utilities, Airlines, Truckers, Rails, Steel, Copper, Aluminum, Coal, Gold, Silver, Gaming, Autos, Tobacco, Disk Drives, Emerging markets and now it’s time to add the all-important Semis as the SOX broke important support on Friday. Even the stronger names are coming under pressure. On top of that, the China bubble may have popped as 100% in 6 months may have done the trick. To show you how insane things are, after a 20% drop off of a 100% gain, China announced they are lowering rates over the weekend…to protect the markets. Hey China, it is still up 80% from this move.

On the good side:

Financials remain with the strong relative bid. This includes money center banks, regional banks, s&ls, credit cards, investment banks. May we say…this had better continue as the market needs leadership. On top of that, managed care and hospitals remain strong as there is a buyout rumor every hour.  We are also noticing the potential for housing, discount retailers and farm machinery to emerge.

Short week this week into the holiday.  We will be surprised by nothing. Just keep in mind, every time markets look like they were headed into dire straits, the pixie dust shows up defending markets. We would not be surprised if they tried to again reverse markets tomorrow. After all, that is what central banks are targeting as they know it is asset prices that are holding things up.  One day doesn’t usually mean much but tomorrow’s close could be muy importante!